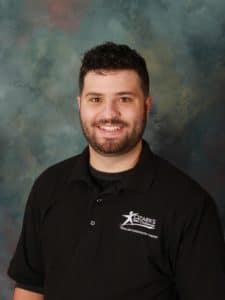 Daniel Jones came to us from Kansas City, MO. On January 7th, 2013 he walked through the doors of Ozarks Teen Challenge an angry and broken teenager. Over a period of time God softened his heart and one day he broke. He decided to give it all to God. Whatever the Lord wanted for Dan, whatever plan he had Dan was going to follow that. After graduating from Teen Challenge God called him to a ministry school in southern Georgia. For two years Dan traveled around the country sharing his story of freedom with those in the same positions he was in not long before that.

Worship was something that God placed on Dan’s heart after getting saved. After completing college he attended an intense worship school where he was trained to be a worship leader. God then called him back to Ozarks Teen Challenge, where he attended 4 years prior, to help young men in the same position he was in just a few years earlier. He has now been serving with Teen Challenge for a year and a half now and loves every minute of it. “God’s plan for me is beyond what I could have dreamed or imagined. I thank God for saving me when I didn’t deserve it and loving me when I hate him. What a wild ride it has been.”